Someone suggested that we are likely in a triple bubble (stock, bond and real estate).  It is high probable that a major correction is going to happen in the near future.  Protecting retirement savings should be the highest priority in this market condition. In this article, I am going to go over how I invest in year 2017. 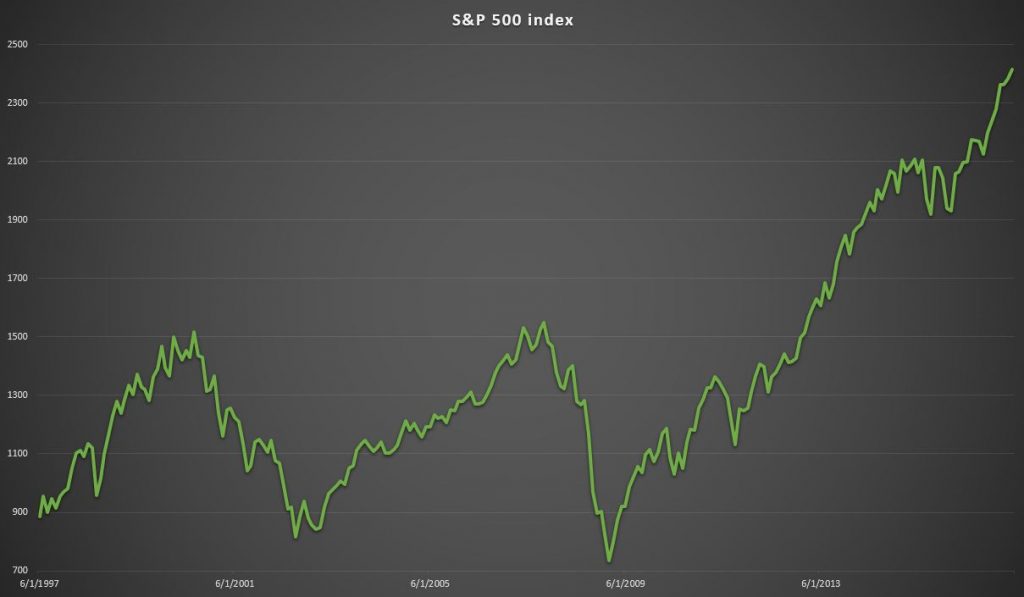 How to protect your assets from market crashes?

Fast forward to 2017, thank for the 8-year bull market, S&P 500 index closed at 2435.61 today (6/22/2017). That is 365% of what S&P 500 index was since it bottomed out. Many of us hope that good time will last forever. However, those who experienced the last 2 major crashes (in year 2000 and 2007) should know that there are cycles in stock market. Lots of people are optimistic about our economy in the US at the moment. When the sentiment changes, people will rush to the exit door and cause stock prices to fall.

How big is the bubble?

It is hard to tell the size of the stock market bubble and how bad the crash would be should the bubble bursts. One of the ways is to compare aggregated earnings versus aggregated stock price in S&P 500. Let’s look at the P/E 10 ratio defied by Nobel Prize winner Dr. Robert Shiller from Yale University. P/E 10 ratio is calculated from the average stock price and the average company earnings in the last 10 years adjusted by inflation  (consumer price index). The higher the ratio, the more expensive stocks are. 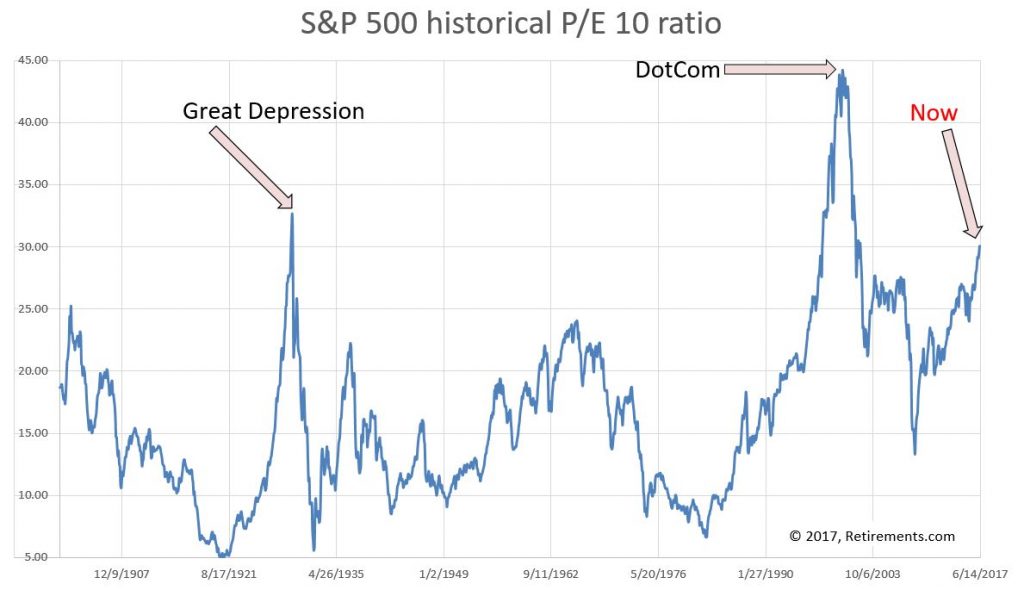 It is not difficult to tell from the chart that stock valuation is very high in 2017. The only times that stock market exceeded current level were in 1929 Great Depression and 2000 DotCom bubble. One may argue that stock market still has room to go up by 50% before reaching the level in year 2000. Yes, there is such a possibility. However, as a risk-averse investor, I wouldn’t count on it to happen.

How low can it go?

S&P 500 dropped about 50% in last 2 major crashes. It lost almost 90% during 1929-1932 Great Depression bear market. No one can accurately predict the future, but it is safe to say that there is a lot downside from here.

Many people suggest that “buy and hold” should be the default investment strategy. In other words, we should purchase high quality investments and hold on to them as long as they are still promising. Getting into and out of the market, as known as timing the market, is not a good idea. I agree to that strategy to the most part for individual stocks. However, if we know that our car is heading toward a wall, shouldn’t we slow down and may be even taking a slight detour?

The following table shows the time it takes to recover from a crash assuming the stock returns 15% a year during the recovery:

I am not kidding that it takes an awfully long time to recover the loss from a market crash. In fact, it took 25 years for S&P 500 index to undo the damage from the 1929 Great Depression market crash.

The following is my personal investment strategy and should not be viewed as an advice to you. You should consult your financial advisor or Certified Financial Planner (CFP) for their suggestions.

I personally sold most of my stock and hold cash for now because someone suggested that other asset classes  (bond and real estate) may be in a bubble as well stock, bond and real estate). There are also experts predicting that yield curve may invert in the later part of 2017. In the past, when we saw inverted yield curve, it dried up the money flow and led to recessions. Correction in stock market followed.

Looking at the last 2 stock market crashes (in 2000 and 2007), it took about 18 months to 3 years to bottom out. So, one of the options for me is to hold on to the cash until 18 months into the next crash (at least 10% drop from the peak). After the holding period, I’d increase my stock holdings, in the form of low cost index funds or ETFs, by a few % each month. This is to do dollar-cost averaging because I can’t really predict when the market will bottom out. Hopefully, I will do better than buy-and-hold.

If I don’t want to hold cash for so long, I would use the cash at hand to pay down the mortgage/home equity line of credit (HELOC) to reduce the loan interest ( rate is 3–4%). After the 18-month waiting period, I could take the money out from existing HELOC and put money back in stock.

In the future, I will cover other strategies that I have considered. Stay tuned. Please check my blog Retirements.com regularly for new articles or share this article with friends and family.

Happiness is not about having excessive material possession. If you already have enough money in the bank to last for your life time, what good is it to you to have more?

Read the full article on http://Retirements.com

After holding cash and bond for a long time, I started to invest in stock again. May seem crazy, but here is why: https://retirements.com/what-to-invest-in-august-2020/